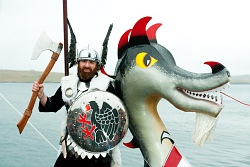 Sigurd Snake-Eye was one of the four sons of Ragnar Lodbrok, the great Viking King (represented in 1987 by ex-Jad Magnus Simpson, Rae’s father). What set him apart from his brothers was that he was born with the image of the ouroborous, a snake biting its own tail, encircling the pupil of his left eye. This had been prophesised by his mother Kraka, the daughter of the Valkyrie Brynhildr.

As a boy Sigurd was close to his father and accompanied Ragnar on a hazardous expedition through Russia to the Hellespont. Later on in life he is said to have sojoull1ed for a time in Scotland and the Scottish Islands, like all wise men.

In 865 King Ella of Northumbria killed Ragnar Lodbrok in a pit of serpents. When Ragnar was suffering in the pit he is reputed to have exclaimed: “How the young pigs would squeal if they knew what the old boar suffers!”

And soon his sons did know, as King Ella was foolish enough to send an embassy to acquaint them of the fact. When the brothers heard of their father’s death Sigurd is said to have cut himself to the bone with a knife he held in his hand and his brother Bjorn gripped his spear so tightly that the imprint of his fingers was left in the wood.

Sigurd and his brothers swore they would avenge his killing in time-honoured Viking tradition. In 866 they crossed the North Sea with a large army. This Great Heathen Army sacked York, met King Ella in battle and captured him. They sentenced him to die according to the custom of Rista Blodam (Blood Eagle), an exceedingly painful death. It consisted of cutting away the ribs from the spine and pulling the lungs backward through the cavities formed to form the shape of an eagle.

When Sigurd and his brothers came back to their realm in Denmark they shared out their father’s lands between them with Sigurd Snake-Eye ruling over Zealand, Skane, Halland, Oslo, Fjord, Agder and a good piece of the Norwegian uplands. Sigurd Snake-Eye also took King Ella’s daughter Heluna, Princess of England, as his wife. They had two children, Aslaug Sigurdsdottir and Harde-Knud Sigurdsson, who became King of Denmark and Sweden.

The Lodbrok brothers turned their attention to raiding in many lands: England, Wales, France and out over Lombardy. They even thought of going to Rome and taking that. Their battles became famous throughout the Norse countries. They were also noted for being the first to carry a raven banner into battle. Their sisters, the daughters of Ragnar Lodbrok, stitched the raven banner in one afternoon. It was said that if they were going to win a battle then the raven would start flapping its wings but if they were going to be defeated the raven would drop motionless.

During the battle of Leuven in 891 against Emperor Amulf, Sigurd Snake-Eye fell along with a hundred thousand Danes and Norwegians. Helgi Hvassi, the Sharp, escaped from the battle with the standard of Sigurd Snake-Eye, and his weapon and shield. He went home to Denmark and found Kraka, Sigurd’s mother, and told her the tidings.

Then Kraka spoke a verse:

"Sad sit the corpse-stalkers,
slaverers after cadavers:
The slain-craver, raven
What a shame! - forsaken
By namesake of Sigurd;
In vain now they’re waiting.
Too soon from life Lord Odin
Let such a hero go.“

Sigurd's son, Harthacanute, succeeded his father as King of Zealand, Scania and Halland, but he lost Viken. He was the father of Gorm the Old, King of Denmark.

Sigurd’s daughter Aslaug, married Helgi the Sharp and they had a son Sigurd Hart. Later, the berserker Haki murdered Sigurd Hart and kidnapped his children, Ragnhild and Guttorm. Before Haki could marry the l5-year-old Ragnhild she was captured a second time by Halfdan the Black (represented in 1968 by ex-Jarl Thomas Simpson, Rae’s grandfather). Halfdan and Ragnhild were the parents of Harald Fairhair, the first King of Norway.

Researched and written by Tanya Odie