The hero who knows well to ride
the seahorse o'er the foaming tide
he who in boyhood wild rode o'er
the seaman's horse to Scania 's shore
and showed the Danes his galley's bow
right nobly scours the ocean now. 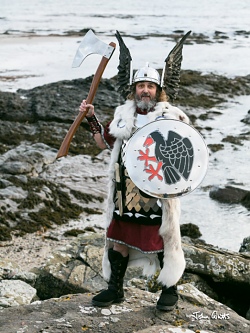 Gamle Erilsson ploughed through the waves with his seahorse, bearing down on the Danish shore. Sparkling and sensuous, white horses danced across their father’s boundless realm; the waves of the sea were said to be the nine daughters of AEgir, god of the ocean. Their long fair hair swept along the gunwales as Gamle gazed into their deep blue eyes. Heimdall, watchman of the gods, looked down from Asgard. Born of the waves, of nine mothers, he was known to be father of all earthly kings. The kingdom of Norway was however somewhat in turmoil.

King Haakon the Good sat on the throne once warmed by his exiled brother, Erik Bloodaxe. The deposed king was slain on an English battlefield and welcomed into Valhalla by Odin as a hero, but left behind were a brood of seven sons, each bent on taking the crown. Gamle was the oldest of the brothers and the rightful heir. After their father’s death they left Northumberland and sailed north with Erik’s ships to Orkney and Shetland. The brothers stayed over the winter until summer made the isles an ideal base for raiding jaunts in Scotland and Ireland. War loomed ominously between King Haakon and Harald Bluetooth, the Danish king. Harald was an uncle on their mother’s side and Gamle saw this as an opportune moment to gain support for his quest. Seizing the day he embarked on the sea road to Denmark.

King Harald was pleased to see Gamle who pledged loyalty in return for the king’s patronage. It was not long before Haakon heard stories that the brothers were on the rampage, marauding around the Baltic and the southern shores of Norway. Many Norwegians gave their allegiance to Gamle leaving the king little option but prepare for battle. Gamle had his wish and their two armies soon met head to head at Avaldsnes on the island of Karmøy. A raging battle ensued and in the middle of the fracas the king exchanged blows with Guthorm Eriksson. It was a brutal affair and seeing his brother slain Gamle ordered the retreat back to Denmark. Haakon warily put up a series of beacons along the coast of Norway. He hoped that these when set alight would give early warning of any threat from Gamle and the Danes.

In 955, after some years of preparation, Gamle’s great Danish army ventured north, stealthily evading the watch of those attending Haakon’s beacons. Surprised, and running out of time, the king managed to assemble just nine ships to defy a fleet of twenty. Outnumbered, and fearing almost certain slaughter, Haakon called his advisers together. Gamle’s troops were chiefly made up of champions from Harald Bluetooth’s army, together with warriors captured during the brothers’ raids around the Baltic. They were all skilled in the art of killing. But all was not lost. Haakon’s right hand man, Egil Ullserk, had a cunning plan and urged the king to take up arms. It may have looked desperately bleak for Haakon but he gained a strategic upper hand by choosing the place to fight. A message was sent to the brothers inviting them to come ashore at Rastarkalv, near Kristiansund.

Egil asked Haakon to give him ten men, each with a banner. The battlefield was large and fiat, overshadowed by a low ridge. Spacing his men out below the top of the ridge Egil knew that their banners would be seen from the other side. His trick worked. In the heat of battle Gamle looked up and saw the standards of his enemy approaching from over the ridge. Thinking they were totally outnumbered the Danes fled to the beach only to find that their ships had been pushed out to sea. When Gamle saw how they had been fooled he turned and called for his war horns. Amid carnage and bloodlust Egil lashed out at Gamle who suffered a dreadful wound. Undeterred the two champions fought to the end. Gamle was victor, hacking down Egil and many others beside.

Gamle may have taken out Egil, but Haakon had the upper hand trapping the Danes with their backs to sea. In a bid for safety the warriors plunged into the seething waters and swam out to their ships. Breakers frothing blood washed over the shore, and Gamle, mortally wounded, waded out into their beckoning arms. Too tired to swim, the waves carried him downwards to be a guest of AEgir, their father. The brothers returned to Norway six years later outnumbering King Haakon with a force no less than six to one. The king died that day at Fitjar on the island of Stord. Gamle’s younger brother, Harald Graafeld, took the throne of Norway, and beneath the brine in AEgir’s hall, drinking the quaff of gods, Gamle looked up and smiled.

Researched and written by Brydon Leslie