Saga of Ivar (The Boneless) Ragnarsson 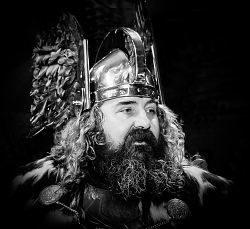 When the Guizer Jarl considers a character to portray in the Up Helly A’ festival he tends to look for those who have been courageous in battle, who have committed fearsome deeds or have ventured far and wide. This year our Jarl has chosen to portray Ivar Ragnarsson, known as Ivar the Boneless. Decidedly not peaceful by any means, he ruled over several countries and might best be described as a creator of states.

Ivar was a Danish Viking chieftain and by reputation also a berserker. He was the son of the powerful Ragnar Lodbrok and his wife Asalauga. Grandson of Sigurd the Volsung and, so the legend goes, Brinhild the Valkyrie. According to the Saga of Ragnar Lodbrok, Ivar was his eldest son. It is said that he was fair, big, strong and one of the wisest men who has ever lived. He was a trusted advisor to his brothers Bjorn Ironside, Ubbe, Halfdan and Sigurd Snake-in-the-Eye.

Ivar got his nickname “Boneless” as he was reputed to have had certain bones lacking or damaged in his leg. There are stories of him being carried on a shield at the head of his army. This defect however did not detract from the fact that he was a man of considerable intellect. He was described as a man of a sly and cunning nature, physically huge with extraordinary strength. A man with strategic skills able to mastermind the Viking storm which over-ran parts of Europe but particularly the British Isles and Ireland during the second period of the Viking age.

The most famous tale concerning Ivar begins in Britain. The story goes that while raiding the coast of England, Ivar’s father Ragnar was captured by King AElla of Northumberland and sentenced to death in a pit of poisonous snakes. Pleased at his capture and killing of Ragnar, AElla sent an emissary to Ivar and his brothers to tell them of their father’s fate. In their great hall the brothers listened as the messenger unfolded his tale. It is said that as they learned of their father’s cruel death in the snake pit Bjorn squeezed the shaft of his spear so tight that it left the imprint of his fingers on the wood, Halfdan gripped the chess board on which he was playing with such force blood shot from his hands, and Sigurd cut his arm to the bone with a knife. Ivar, however, remained restrained controlling his wrath. He listened to the tale and allowed the emissary to go in peace but he swore vengeance on King Aella.

In the autumn of 865AD, with his brothers Halfdan and Ubbe, Ivar led the Great Heathen army in the invasion of the East Anglian region of England. This army was exceptionally large for the period, containing several thousand fighters. It originated in Denmark and pillaged much of England in the late 9th century. Under the command of the three brothers it sought to conquer and settle England. After the army’s arrival an accommodation with the East Anglicans was quickly reached. The following year Ivar turned his attention northwards to Northumbria and King AElla.

Ivar led his forces north on horseback and easily captured York from the Northumbrians. His brothers then tried to avenge their father and attacked King AElla but were beaten. Ivar then went to the King himself and said he sought reconciliation. He asked for as much land as he could cover with an ox’s hide and swore never to wage war against the King. Ivar then cut the hide into so fine strands that he could envelope a large fortress which he could take as his own. As Ivar was a most generous man he attracted many fine warriors whom he kept from AElla. When the King was attacked by Ivar’s brothers for the second time they met with much less resistance and AElla was captured alive. When the brothers were to decide which punishment to inflict upon the King, Ivar suggested carving the “Blood Eagle” on his back. This involved cutting away the ribs from the spine and pulling the lungs back through the chest. This was the direst punishment known to the Vikings; one reserved for those who had committed the most heinous of crimes.

Revenge for their father’s death accomplished, the brothers continued their subjugation of the north of England concluding their domination with the capture of Dumbarton, capital of the Scottish Kingdom of Strathclyde. Considerable loot was shipped back to Ireland where Ivar now lived and reigned.

Having re-united the Viking forces in Ireland, Ivar reigned for many years then handed over power to Olaf the White. After this we lose track of Ivar for a time. It is thought he returned north to revisit his homeland to organise and dispatch forces for further invasions of England. It is around this time that we recall a tale told by a man named Ottar, who gave his name to Otterswick in Yell. Ottar’s story tells that our hero spent some time staying with him there. Ivar and Ottar were both descended from Sigurd the Volsung. Ivar may have been on a recruitment drive as he visited his cousin or was, more likely, sheltering from the weather on his way North.

By this time Ivar had under his control Northumbria and the Kingdom of the Scots, subjugation of Mercia and East Anglia and a fortified base on the Thames which threatened Wessex. Ivar is attributed with the slaying of St Edmund of East Anglia in 869AD. By some accounts, when Edmund refused to become the vassal of a pagan, Ivar had Edmund bound to a tree and shot with arrows.

There is also an interesting prequel to the Battle of Hastings concerning Ivar mentioned in the Saga of Ragnar Lodbrok. It is said that before Ivar died he ordered that his body be buried in a mound on the English shore saying that so long as his bones guarded the coast no enemy could invade successfully. This prophecy held true, says the saga, until William the Conqueror came ashore. He went to the burial site and broke the mound and saw that Ivar’s body had not decayed. William had a large pyre made upon which Ivar’s body was burned, then he proceeded with the invasion and achieved victory.

It is also believed that the Ui Imair, a Norse-Gaelic dynasty who ruled the Irish Sea and Western coast of Scotland from the late 9th century into the 10th, were connected with Ivar. The name is Old Irish and means “grandchildren” or “descendants of Ivar” His obituary is recorded in the Irish Annals under the year 873AD, reading “Ivar King of all the Norse of Ireland and Britain, ended his life”. It is said that he died a pagan without sword in hand so his entrance to Valhalla was assured only because of his kinship to Sigurd the Volsung and Brinhild; his great achievements in the Viking world eternally remembered.