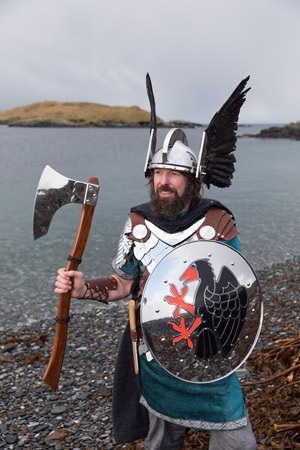 Stewart has chosen to represent Thorvald Thorvaldsson, son of Thorvald Thoresson, who was in turn portrayed by his own father, the late Harry Jamieson, when he was Guizer Jarl back in 1981.

Lord Thorvald Thoresson was a knight, a high ranking official in the king’s retinue. As a man of title and distinction he was entrusted with a key position in the kingdom, namely that of syslemann or governor, and it was in this capacity that he represented the royal interests in his native Shetland. He was based at the ducal estate on Papa Stour which belonged to Duke Haakon Magnusson, and it was here, in 1299, that he had an unfortunate run in with Ragnhild Simunsdatter. She screamed abuse at him, calling him “Judas” no less. Her contention was that Thorvald was embezzling the duke’s income by collecting additional taxes, which only went so far as to line his own pockets. Thorvald, anxious to clear his name of this slander, brought the case to court and ensured that a letter was promptly sent to Norway for the attention of the duke, who ascended to the throne later that same year. Lord Thorvald married Ragndid, daughter of Baron Jon Ivarsson of Suðrheim, who was both a relative and counsellor of the king. The couple had two children, a son also called Thorvald, and a daughter, Herdis.

Thorvald Thorvaldsson grew up on Papa Stour, which by the early fourteenth century had been gifted to his father by King Haakon in recognition of his loyal service. On 8 December 1330 he was granted a papal dispensation to marry Æsa Haakonsdatter, daughter of one of the king’s counsellors, with the Pope’s recommendation that the marriage be for the ‘settling of family feuds’. Lord Thorvald had arranged a wedding for his son with a suitor from one of Norway’s most influential families, a marriage which would solidify his own position within the highest echelons of society. It would seem however that the noble lord outlived his son as it was his daughter Herdis that inherited his estate, apparently in the absence of any male heir.

According to folklore Lord Thorvald, or Tirval as he is perhaps better known, is described as somewhat a pirate, robber and murderer who ‘resisted all the attempts that were made to bring him to a trial’ for his wicked acts of depredation. It’s true that as governor upholding the law may have made him fairly unpopular, but there’s nothing to suggest in the contemporary sources that he was an abusive tyrant. He is rather depicted as a formidable yet dutiful steward who gained the king’s favour. It’s possible however that the infamous deeds attributed to Lord Thorvald may in actual fact belong to his son and namesake.

Folklore tells us that Thorvald had eleven sons, but only one daughter. He had great plans to marry her off to an eminent man of wealth, but instead she fell in love with Egil, a young man from across the bay at Islesburgh (Egilsborg). Thorvald was furious. He raged and tried to make her bend to his will, but she wouldn’t budge. In the end his fierce temper got the better of him and he stranded her high out of reach on top of one of the tall stacks at the entrance of Hoosa Voe. It was cold, lonely and to make matters worse the ‘Maiden Stack’ is so steep it’s virtually impossible to climb, either up or down. Nevertheless, one dark night her dauntless lover rowed quietly over what is now known as Egil’s Soond, to the base of the stack. Undeterred he scaled the sheer rocky pillar and rescued her.

By daybreak the couple had made it safely over to Islesburgh, however their safety was but temporary. It wasn’t long before Thorvald realised that his only daughter was missing, and he had a good idea where to find her. Thorvald was ruthless. Landing at Islesburgh he soon captured the boy and carried him back to Papa Stour where he convened a holmgang, a fight to the death. Although this kind of gory duel had long since been outlawed, Thorvald would not be dissuaded from exacting his vengeance. The pair faced-off in the ring, but Egil was no match for Thorvald who dispatched him with ease. The circle of stones can still be seen at the head of Hoosa Voe today. But Thorvald wasn’t finished. Together with his eleven sons he set sail for Islesburgh bent on conquest, but their foray didn’t quite go as planned. Thorvald and his whole family drowned when their ship ran aground on a skerry just south of Egilsay. The craggy rocks of Turvald’s Head stand nearby, an eerie reminder of an infamous character kept alive in folk memory to this day.