Saga of Odin – Lord of the Gallows 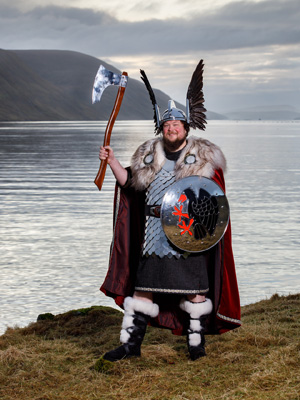 Odin, All-father, was the king of the Norse gods. As the god of battle he had it in his power to cause wars and to decide who should win. He lived in Asgard, the highest of the nine worlds of Norse cosmology. From his throne he could survey everything in the worlds below. The ravens Huginn (thought) and Muninn (memory) helped him by flying far and wide. When they returned they sat on his shoulders and reported what they had seen.

The nine worlds were held together by the roots of the Tree of Life (Yggdrasil) which grew from the deepest depths up to the stars. Animals lived in this tree – deer and goats lived on its foliage and Ratatoskr, the squirrel, ran up and down the trunk spreading malicious gossip between the hawk and the eagle (who lived in the highest branches) and the mighty serpent (who lived among its deepest roots). This distracted the serpent from gnawing the roots in order to destroy the tree.

Odin was also the god of poetry and wisdom, and his chief aim in life was the pursuit of knowledge.

The old Norse word rune means secret, and runes were believed by Vikings to be sacred secrets and a means of interacting with the living and the spiritual world. The runes lay in the Well of Urd, at the base of Yggdrasil. Since they do not reveal themselves to any but those who prove themselves worthy of such fearful insights, Odin hung himself from a branch of the tree, pierced himself with his spear and peered into the shadowy waters below. He forbade any of the other gods to grant him the slightest help, not even a sip of water. He stared downward and called to the runes.

He survived in this state, teetering on the precipice that separates the living from the dead, for nine days and nights. At the end of the ninth night, he finally saw shapes in the depths: the runes. They had accepted his sacrifice and shown themselves to him, revealing to him not only their forms but also the secrets that lie within them. Having fixed this knowledge in his memory, Odin ended his ordeal with a scream of exultation.

Equipped with his knowledge of how to use the runes, he became one of the mightiest and most accomplished beings in the cosmos. He learned nine magic songs and eighteen highly powerful charms that enabled him to heal emotional and bodily wounds, to bind his enemies and render their weapons worthless, to free himself from constraints, to put out fires, to expose and banish practitioners of malevolent magic, to protect his friends in battle, to wake the dead, to win and keep a lover, and to perform many other feats.

Odin’s ordeal was a sacrifice of himself to himself and is the ultimate sacrifice – for what could be a nobler offering to the god than the god himself? Part of Odin survived in order to be the recipient of the sacrifice – in addition to the runes themselves – and another part of him did indeed die.

Perhaps the strength of character of many Viking warriors was largely due to the example set by him, with the songs sung in his honour telling of how he wasn’t afraid to sacrifice what we might call his ‘lower self’ to his ‘higher self’, to live according to his highest will unconditionally, accepting whatever hardships arise from that pursuit, and allowing nothing, not even death, to stand between him and the attainment of his goals.